To Yield or Not to Yield

I have several pet peeves. One of them involves a small triangular sign that appears on roadsides periodically. Some of you may have seen it. 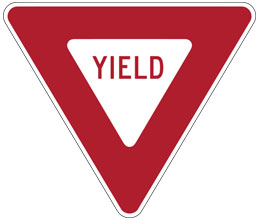 Now, for those that don’t know, that’s called a Yield Sign.

According to the U.S. Federal Highway Administration’s Manual on Uniform Traffic Control Devices, a YIELD sign may be warranted:

That’s a a lot of technical gobbledygook, but the long and the short of a yield sign means that a vehicle driver must slow down and prepare to stop if necessary — usually while merging into traffic on another road — but doesn’t need to stop if there is no reason to do so.

“No reason to do so” means if there are NO CARS traveling down the street you’re yielding for.

I tend to find that few people actually know what a yield sign means. Let’s do some math.

Yes, contrary to belief, YIELD does NOT equal MERGE. It’s become a rather big annoyance this week, since I’ve been in at least 4 situations where stupid things could have happened because other drivers think YIELD = MERGE or they just plain ignore the fact that the Yield sign is there. Since I happen to like my car and like even more to be able to drive myself to work and school every day, silly people ignoring the real meaning of a Yield sign can lead to some bad situations.

But all that pet peeve stuff aside, this is a design and art blog. What does this have to do with design? Well, most people don’t think about it, but the traffic signs that we see every day had to be designed by someone. 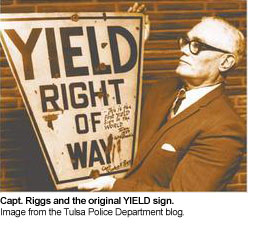 In the case of the Yield sign, the original concept and design was created by Capt. Clinton Riggs, a police officer in Tulsa, Oklahoma. According to the Tulsa Police Department’s official blog, “The first ‘yield right of way’ signs were installed on a test basis in 1950 at First Street and Columbia Avenue, the most dangerous intersection in Tulsa at that time.” The original design was a yellow keystone shape with black lettering (left). Over time, that evolved into triangular yellow signs that simply stated “yield” in black type to the red and white “Yield” signs that are part of the U.S. Department of Transportation’s official spec books for traffic signs that we typically see in the U.S. today.

I find it interesing to see where the designs of ordinary, everyday things like this come from. We tend to take some things, like traffic signs, for granted and never think that someone had to think up the designs for these things. Just a little useless fact there to help us remember that there’s design all around us. Even when we don’t think it’s there.