First off, high school can be rough. Especially if you’re in love with someone, but you’re too chicken to tell them how you feel.

So, here’s the problem (and here’s a chart to help you get more confused). Ryuji Takasu and Yusaku Kitamura have been best friends since they were young. Taiga Aisaka and Minori Kushieda are best friends as well. Ryuji has a crush on Minori. Taiga loves Yukasu. And neither one can bring themselves to tell the one they love how they feel. Then, halfway through the school year, Yusaku’s childhood friend Ami Kawashima transfers in and she comes to like Ryuji. And then what would happen if the arrangement to get Minori and Yusaku to love them back leads Ryuji and Taiga to really learn that they love each other? Confusing? Yes. But it’s high school after all. 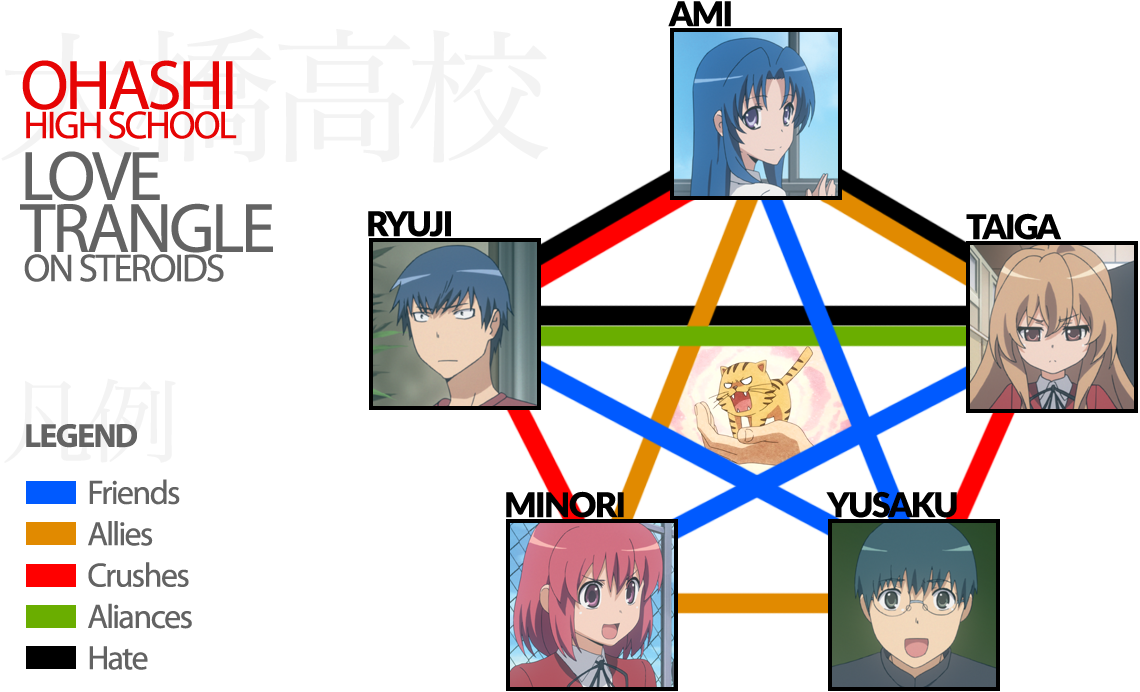 Ryuji is frustrated at trying to look his best as he enters his second year of high school. Despite his generally gentle personality, his eyes give him the appearance of an intimidating delinquent and most of the school is scared of him because of his looks. Taiga, who has been given the nickname “The Palm-Top Tiger” because of her diminutive size and her instant temper, has a pretty negative attitude towards most people around her and has a habit of snapping violently at people. On their first day of the new school year, Ryuji runs into Taiga – literally – and she takes an instant dislike to him. After their first day is done, Ryuji finds Taiga in their classroom having hidden in a closet. He comes in to get his bag, but Taiga freaks out. They battle for the bag, but Taiga ends up leaving in a huff. Ryuji can’t figure out what her problem was until he’s working on homework that night and finds an empty envelope addressed to Yusaku, an envelope that should have contained a love letter. Figuring her secret is out, she enters Ryuji’s apartment and attempts to ambush him in his living room. They fight, Taiga thinking that Ryuji read the letter that didn’t get put into the envelope. Hunger wins out though, as Taiga hadn’t eaten much that day. With Ryuji having discovered that Taiga has a crush on Yusaku, he shows her all the things that he’s created as a sign of love to Minori, consoling her that things will turn out alright. 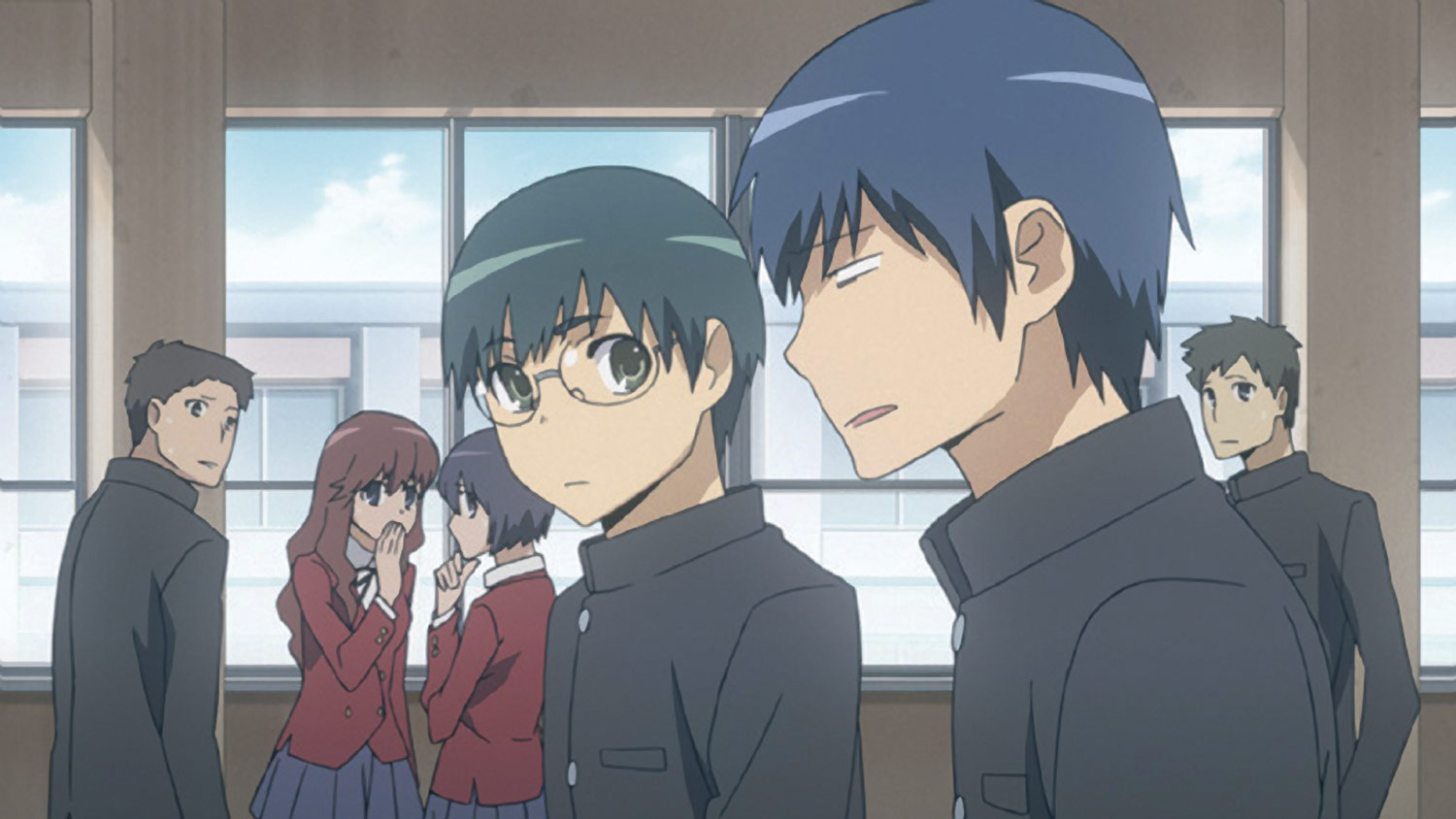 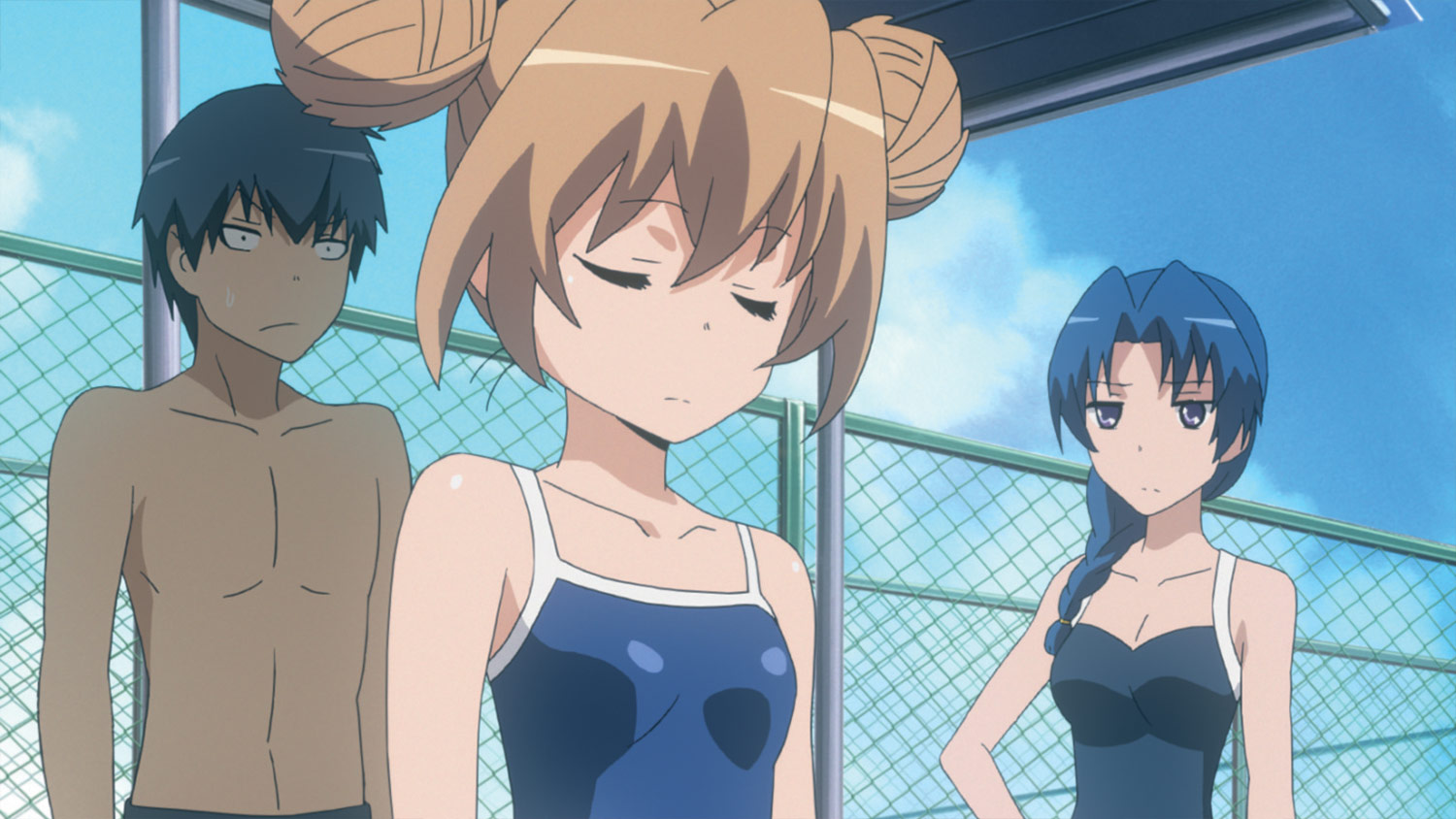 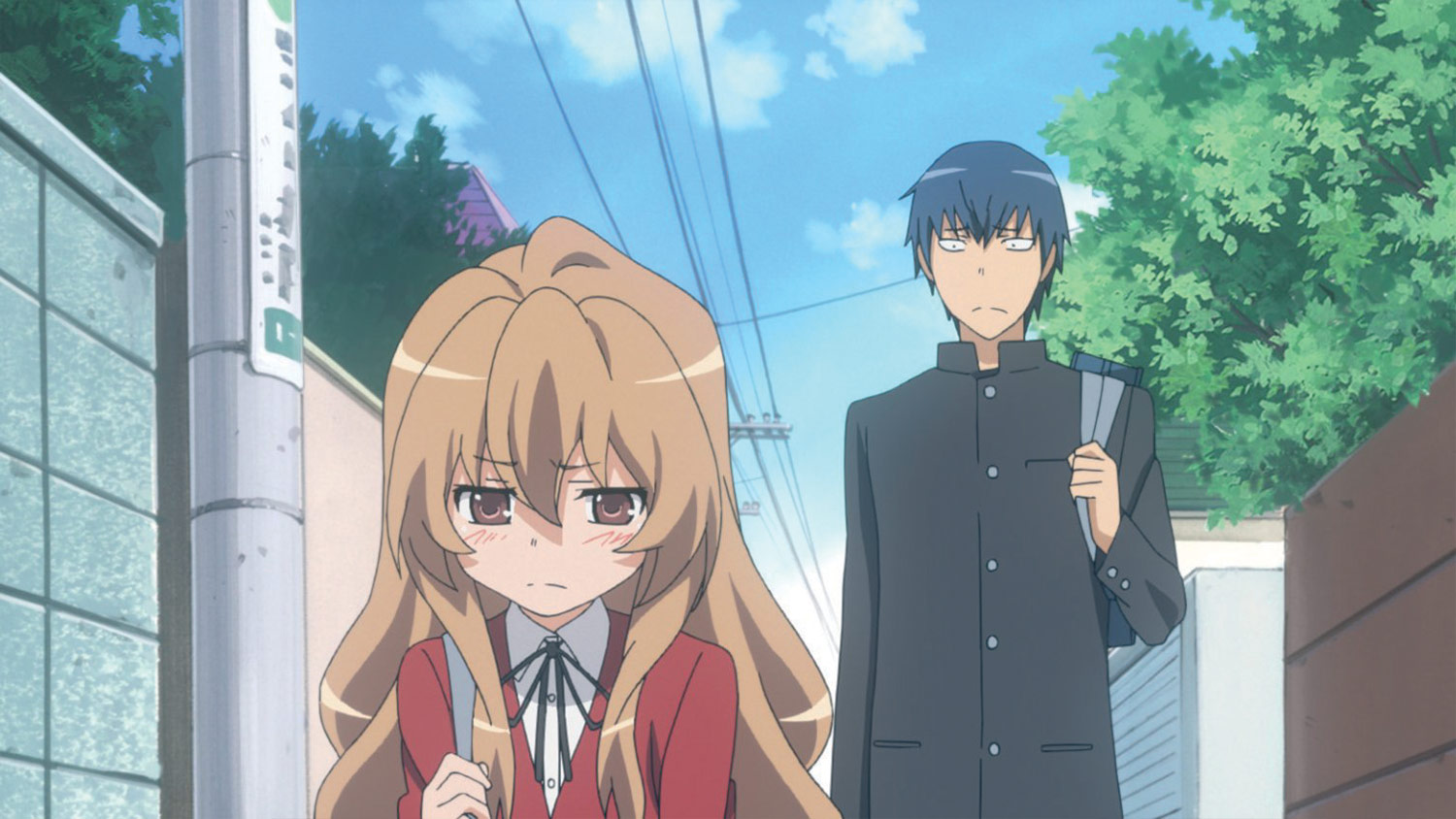 To make their whole first day encounter even more awkward, they find that they are living in adjacent apartments, their windows facing each other. Now that Ryuji has discovered Taiga’s crush on Yusaku, and Taiga knows out about Ryuji’s crush on Minori, they make an arrangement to help set each other up with their crushes. Ryuji agrees to do whatever Taiga tells him to do, treating him like a dog, and as such, she starts to refer to him as a mongrel when she’s angry with him.

Taiga lives alone, away from a rather broken family and Ryuji lives with his over-the-top and frequently hungover mother, who works in a bar as a hostess. Ryuji is a clean freak and definitely the domesticated type. He has to take care of his mother most of the time because of her typical inebriated state and is the one that cooks and cleans around the house. When Ryuji realizes how poorly Taiga takes care of herself, seeing all the junk food she eats and how horrifically messy her apartment is, he decides that as a part of their arrangement that he’ll start helping take care of Taiga as well. He starts cooking for her, making her lunches, playing human alarm clock each morning, and keeps her generally going in a positive direction.

Ryuji and Taiga begin to realize the situation they’re in when they each tell their story of how they got to the point of needing help to get their crush. Ryuji has liked Minori for a long time. Taiga finds that he has boxes and boxes of things to give to Minori, but can’t bring himself to do it. Ryuji finds out that Taiga once had a chance to have Yusaku after he asked her to go out with him, but Taiga shot him down, a choice she now regrets. 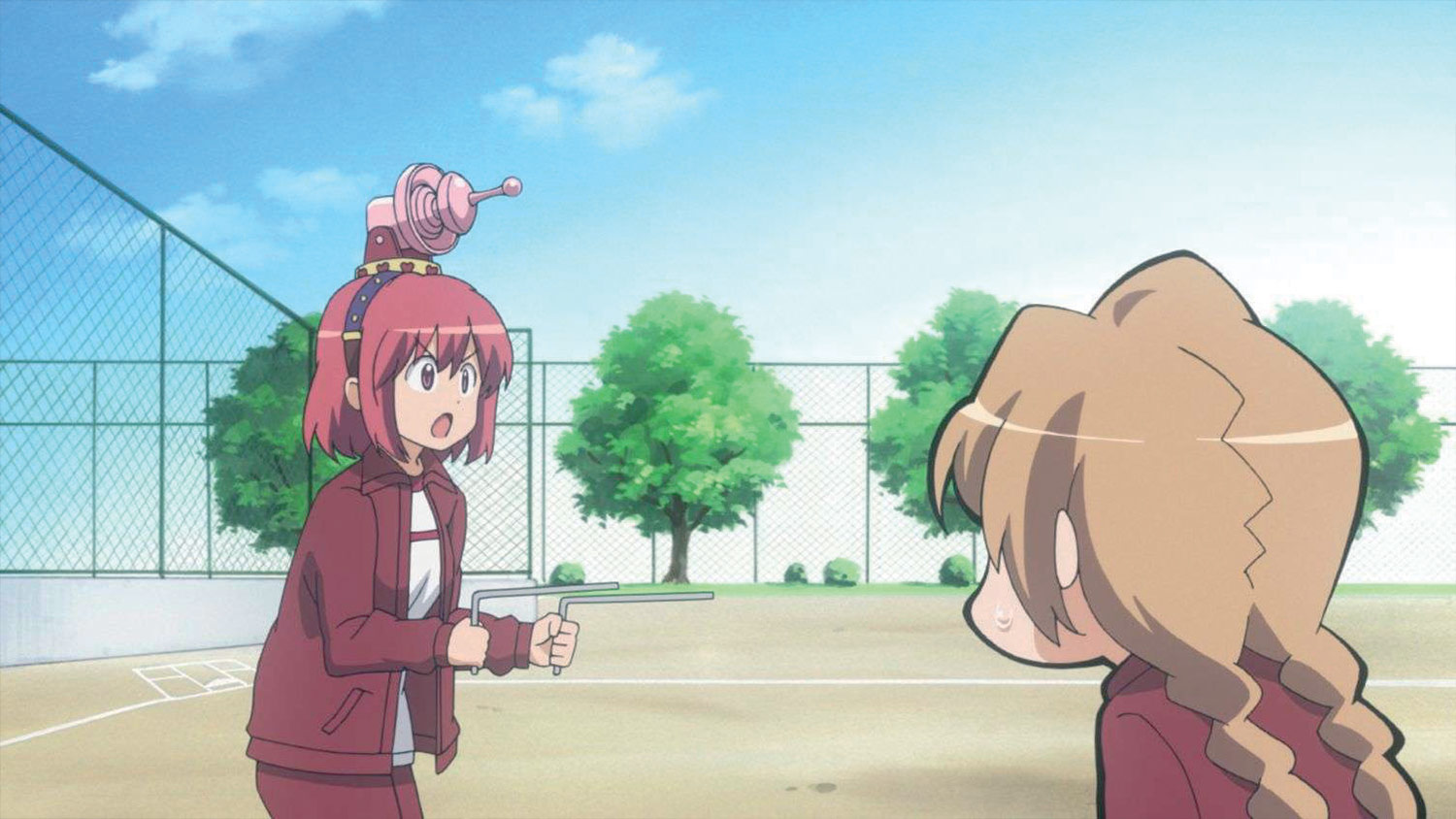 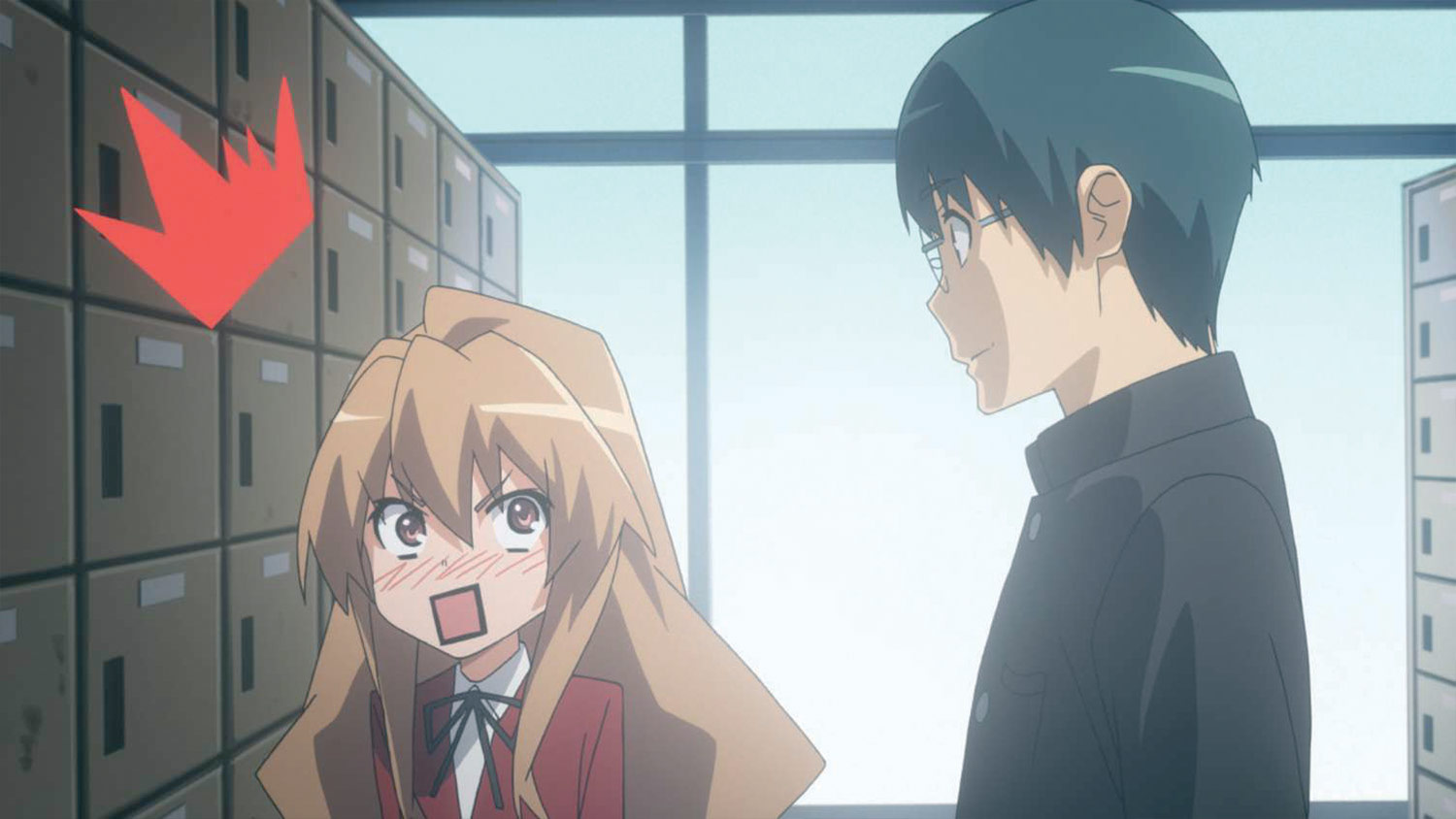 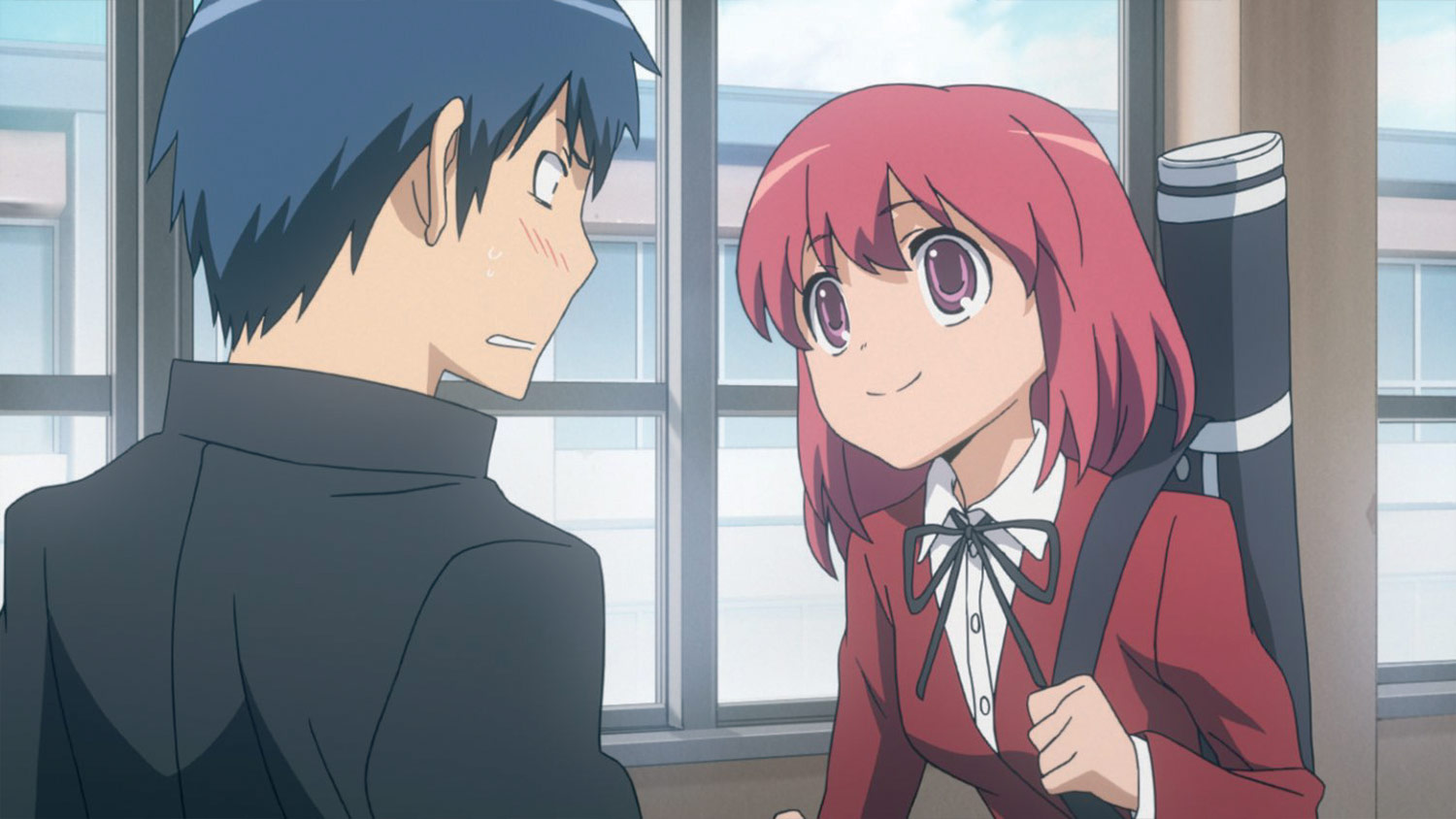 At school, things start getting tense and awkward. When the student body starts seeing Taiga and Ryuji together, the fear levels begin to rise since the two most feared students at the school are “together,” but rumors also start to fly that they’re a couple. Taiga and Ryuji get put into a strange place as both Minori and Yukasu start acting on the rumors and start to give Ryuji and Taiga space to explore their new relationship. Both Ryuji and Taiga deny that there’s anything going on between them, but no one seems to want to listen to their emphatic denials.

To make things more awkward, Taiga and Ryuji start doing things to defend each other as different groups come after each of them. Ryuji sets up situations for Taiga to get Yusaku to notice her, but it always seems to get derailed or will backfire somehow. Meanwhile, she keeps trying to get Minori in a place where Ryuji can tell her how he feels, but always chickens out.

As the series progresses, Taiga and Ryuji have ample opportunities to say how they feel about Yusaku and Minori, but they always turn out badly. Part way through the school year, Yusaku’s old childhood friend, Ami Kawashima, transferred into the school. Ami is a fashion model, and is very popular with the guys and girls. However, behind her cheerful facade is a spoiled brat who looks down on everyone that she isn’t trying to impress. Yusaku hopes that Ami will be honest with her true character, and drop the dual nature she relies upon. She develops a fierce rivalry with Taiga, and tries to flirt with Ryuji to demonstrate how she can easily manipulate him to take him away, but Ryuji is well aware of her true nature and diffuses her many advances to irritate Taiga.

Eventually, both Taiga and Ryuji start to realize that they both understand each other so much on a personal level that they start to like one another, contradictory to their arrangement to help each other find love with Minori and Yusaku. Of course, that complicates things. But then, yes, it’s high school. Life is complicated. Will Taiga get Yusaku? Will Ryuji get Minori? Or will things turn out just as complicated as life seems to be for them all? You’ll have to watch to see how complicated things truly get. 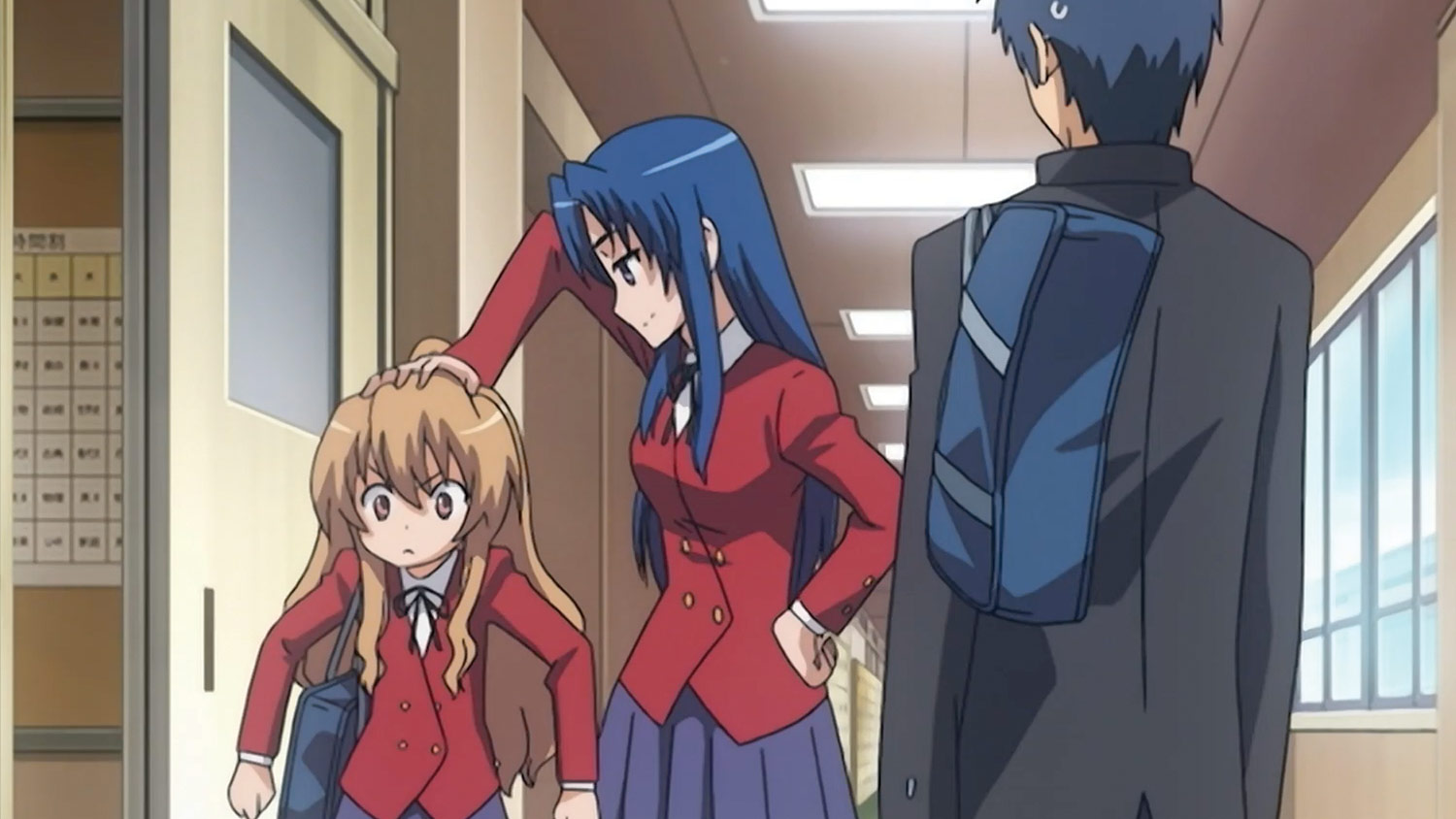 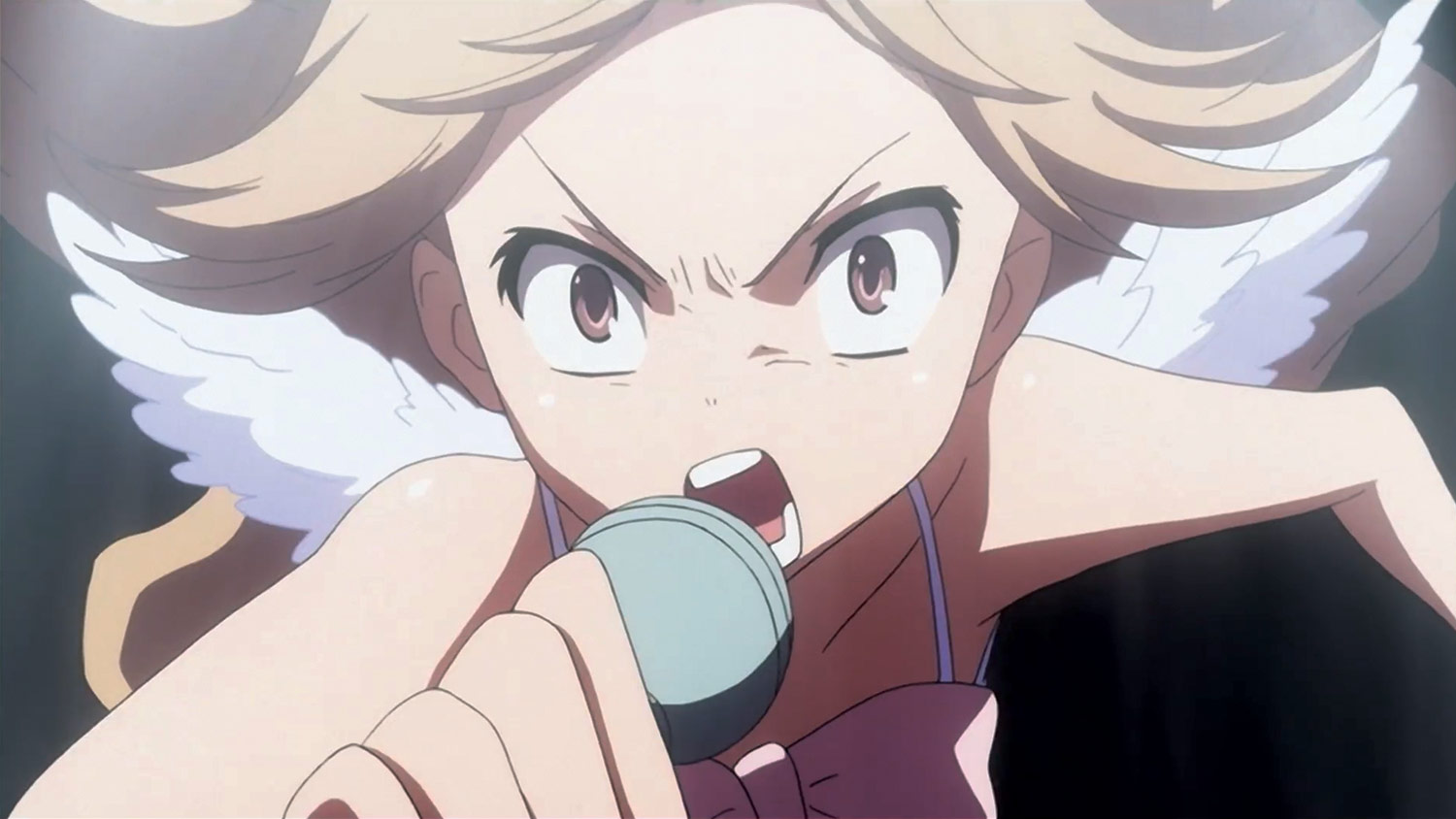 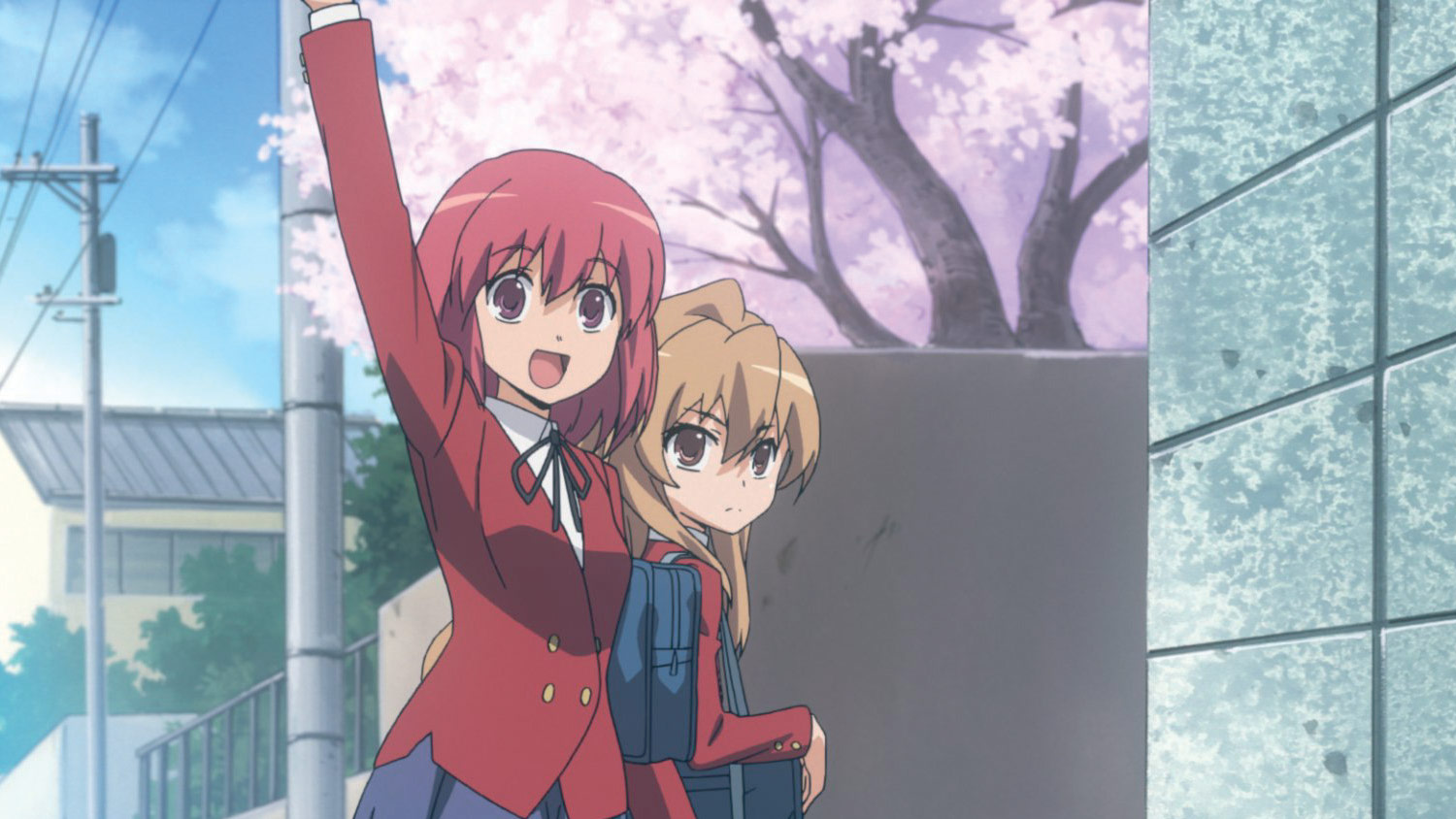 The high school setting is a fairly typical one for a youth-centered anime series. Toradora! is obviously not immune to that scenario. The path to the ultimate ending of the series, while not really unexpected, is a fun trip getting there. The series gives us the typical high school elements, like school festivals, PE classes and the obligatory swimming period, but with the whole love triangle on steroids going on, it gives us a fun take on all of the typical high school events we see in this type of anime series.

The series is produced by J.C. Staff who is very familiar with the high school anime series, having produced series like Revolutionary Girl Utena, A Certain Magical Index, and Azumanga Daioh, to name a few. They have another great school series with the combination of fun and drama in Toradora! And while it may be a bit predictable, it’s an entertaining series with lots of twists and turns to get us to the end. I saw the first couple of episodes subtitled and then watched the whole series dubbed, both times on Crunchyroll. The presentations for both worked very well. In a day and age where the dubbed versions are typically very good, Toradora! isn’t an exception to that. The English dub cast did a great job and the voices matched up really well with the characters. It was a fun series to watch and had a nice twist on the typical high school anime scenario with the love triangle on steroids. If you’re into the high school anime genre, and love good comedy, crazy drama and a bit of romance, you can’t miss Toradora! 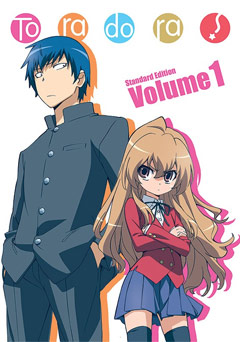 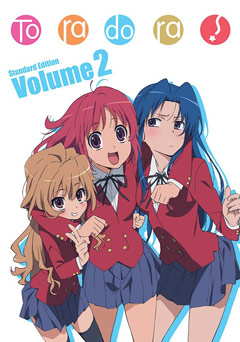 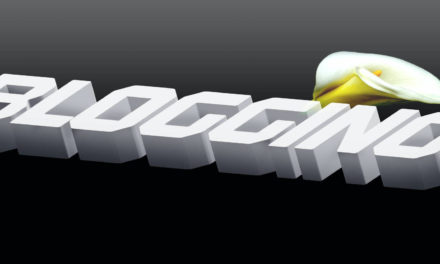 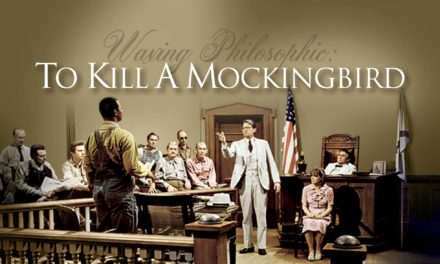